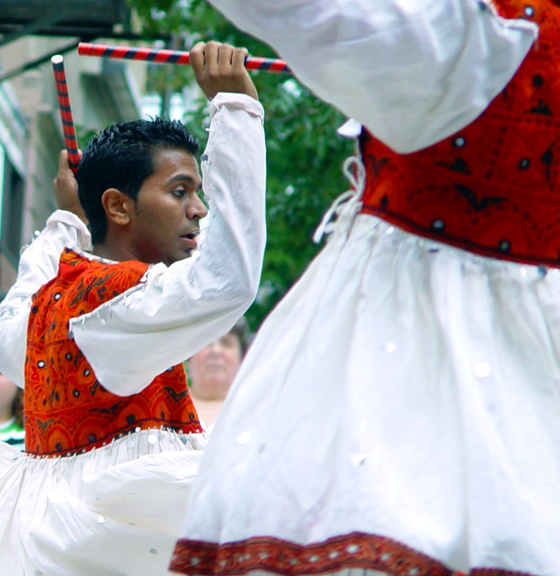 Navaratri is a festival dedicated to the worship of the Hindu deity Durga. The word Navaratri means ‘nine nights’ in Sanskrit, nava meaning nine and ratri meaning nights. During these nine nights and ten days, nine forms of Devi are worshiped. Navaratri represents a celebration of the Goddess Amba, (the Power). Navaratri or Navadurga Parva happens to be the most auspicious and unique period of devotional worship of Shakti (the sublime, ultimate, absolute creative energy) of the Divine conceptualized as the Mother Goddess-Durga, whose worship dates back to prehistoric times before the dawn of the Vedic age. Traditionally, Navratri celebrations are linked to different dance forms, primarily garba and raas.

Garba honors Durga, the feminine form of divinity. Garba is performed in a circle as a symbol of the Hindu view of time. The rings of dancers revolve in cycles, as time in Hinduism is cyclical. The dance symbolizes that God, represented in feminine form in this case, is the only thing that remains unchanging in a constantly changing universe (jagat).

Raas, commonly known as “Dandiya Raas”, is performed during Navaratri. Other forms of Raas include Dang Lila from Rajasthan where only one large stick is used, and “Rasa lila” from North India. In Dandiya Raas men and women dance in two circles, with sticks in their hands.

Navratri in Vancouver has been celebrated for almost half a century. Although there are various different types of Navratri events taking place throughout the Lower Mainland, the Navratri Festival prides itself on celebrating Navratri as authentically as we can. We want to emulate our ancestors who have been celebrating this beautiful festival for over a thousand years! If you want to witness and participate in an event that is bringing the traditional Gujarati Navratri into Canada than this is the event for you!

Will food be provided?

Authentic vegetarian Gujarati and Indian food will be provided each night with a full meal provided on weekends.

What should I wear?

Traditionally, women wear ghagras or chania cholis and men wear kurta pajamas. However, feel free to wear any style of Indian clothes and if you may not have Indian clothes, anything you feel comfortable dancing in!

Do I need to know how to do garba for raas before coming?

No! Our organizers and regular attendees are more than happy to teach you the different styles of dancing that occurs at Navratri. We are excited to share our culture and heritage with you and would be thrilled to have you join us regardless of skill level.

What time does the event end?

The event ends when you want it to! Our band is happy to and used to playing until the early hours of the morning on weekends so as long as you’re having fun dancing, our musicians will keep playing as long as reasonable possible!

How do I get to the event?

The event is centrally located in Surrey and is easily accessible by car or by transit.  View the map above.

Yes! Dandias will be provided and we always have plenty for each attendee. If you would like to bring your own dandias you are more than welcome to do so!

Feel free to email us at info@navratri.ca with your queries and one of our representatives will be in touch with you, or contact any one of the individuals below: